Home > Outbuildings > Enforcement Order for Having No Plans: A Case Study 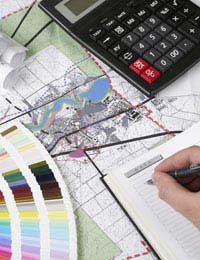 Building your own home should be an exciting project and one that is remembered with happiness. For Michael and Sue James they have only unhappiness and disappointment to remember.

“We are not idiots and we most certainly are not the type of people who knowingly break the law,” explained Michael James. “We started building our own home six years ago after reading many magazines and books on the subject as well as watching television programmes and speaking to other self builders. A condition of our self build mortgage was that a certificate of the build had to be signed and handed over before the next part of the loan was paid to us. The architect had to be a member of the RIBA. We found such a person operating from a design studio in a nearby town. He was a very affable chap and we also had him control the planning application and design the house for us.

Everything seemed to be going along well. Yes the architect was a bit of a bore. It seemed he was going through a marriage breakdown and we found it best to steer him away from personal problems when chatting to him or it took ages for him to answer a simple question about the house. We used to meet up with him when the building inspector visited the site so we knew that all was well at every stage of the build. I did work on the site assisting the bricklayers and supervising the build so it wasn’t as if we were distant builders.

The day came when we moved in, there were several things left to do but we were eager to live in the house and get on with our lives after a very busy year. It was after only three months that a worrying letter arrived from the planning office. It had been pointed out to them that we had a window in the property that had not been passed. We wrote straight back to assure the department that indeed the window in question had been passed along with an alteration to the back of the house. We gave details of the date the amended plans had been passed. That was when the bombshell was dropped. The plans had not been passed by the planning department although they had been rubber stamped by building control.

Our world seemed to cave in around us. Visits and telephone calls to the planning department showed they were correct but how could this have happened? A visit to the architect found that he had tried to save the cost of his postage and had always sent the paperwork in one envelope, He assured us this was common practice but it didn’t help us at all. We were invited to resubmit new plans but a neighbour who had instigated the complaint was vocal in his response to the new plans and they were rejected. We were told to pull down the back of the house and rebuild it one metre shorter. The window, the reason for the initial complaint was accepted.

We had no choice but to appeal to the Department of the Environment which is the final chance before having the enforcement finalised. The architect was very helpful and found us an expert that cost ten thousand pounds to represent us; it seemed he always won his case. This time he lost. Not only that but we had only weeks left to correct to house to the exact plans or the council would do it themselves and bill us for their charges.

Yes we were novices but we were not stupid. As the initial shock wore off and we investigated further we felt that the architect was to blame for the error and at the end of the day he belonged to an official body so they could help. Sue spent time speaking to them on the telephone to find that the architect was no longer a member and even if he had been our problem could not have been helped by the organisation. The architect simply cried in his beer that due to his marriage breakdown he didn’t even have a home to live in as it belonged to his ex wife. It seemed he slept at his office and to make matters worse he was completely broke and couldn’t even compensate us even if he wanted to. We walked away from the whole situation some £15,000 in debt and with a loan to pay to cover the costs.

Years later we can see that we should have pushed the man more to recoup money lost due to his negligence. He is still in business albeit under another name. Sue still wants to walk into his office and confront him. Any joy left in our home has been long lost. Sue suffered ill health because of the whole nasty matter and the planning office changed its rules so it didn’t happen to anyone else. Bitter? Yes we are.”
Next Page

Stuck With a Part Built Home: A Case Study