Home > Get Building > Planning and Building an Underground House

Planning and Building an Underground House 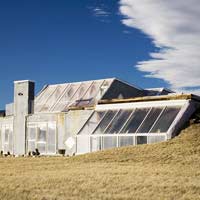 Underground homes are still considered very unusual, to the extent that planning officers will almost certainly raise their eyebrows if you take them a self-build house project that has underground elements.

In some areas it can make complete sense to use the land in this way. It allows people to get round height planning restrictions and there are many inherent of eco-friendly aspects too.

Most people, if you tell them you are planning an underground home, will think of a big molehill with nothing above ground. And in fact many 'underground' homes may be like this, they will be dug in a little but the effect is really achieved by having have soil built up against the walls of the house once it's built. This type of home is usually referred to as 'earth-sheltered' rather than underground.

There are many variations on the underground theme and two homes featured on the TV programme 'Grand Designs' bring this home. The first was an urban project in London and the second in a rural location. The urban project had very little projecting above ground, less than one storey, and had another complete storey underground.

The rural project in Cumbria was more of a 'cut and cover', where a disused quarry had been excavated and the house built into it. The house therefore presented two storeys on the lower side, enabling them to be completely glazed, with light flooding in, and only the back of the house didn’t have windows. This was alleviated by sun tubes which bring light down from the roof.

Planning For an Underground Home

When planning houses like this the first place to start is the underground level. Urban projects are likely to have local infrastructure running through the land, like sewers, electrical conduits and gas pipes. Moving this infrastructure can add a lot to the cost of a home. Conversely, in a rural area, you may have none of this but the rock below the topsoil may be impenetrable.

The key to these issues is to make sure that you survey the plot before you buy it, and have initial meetings with the relevant planning department. Make sure you do a lot of homework and present well-thought out plans as self-build projects are still rare and underground houses even more so.

If you turn up with woolly ideas that haven't been thought through, you are unlikely to impress. Although it will cost you money to hire professionals to give advice, it is worth doing so.

Presenting professional plans from an architect and having the results of the various surveys will show them that you are serious self-builders who see this as a good use of land and an excellent way of building a home. You will also need to show that you have considered the drainage, ground water levels and load bearing nature of the land you're intending to build on (or in).

Underground houses have inherent ecological advantages as the temperature just below ground level is usually warmer than above ground and, crucially, doesn't fluctuate so much. This means that top-up heat in the home in winter ought to be all that's required, and with judicious use of solar panels your home could well be energy self-sufficient.

An added benefit of this natural insulation is that there'll be less intrusive external noise as well. The build process can produce less waste, as excavated material can often be used to build up soil levels around and against any above ground parts of the house.

Planning the Vital Areas of an Underground Home

The crucial areas that need attending to in the planning of the actual house are lighting, moisture control and ventilation. Many urban underground homes have sophisticated opening roofs to allow air in, or the other option is to go for a sealed controlled ventilation system, something that's becoming popular for sustainable self-build homes whether they are underground or not.

Moisture control can be done by tanking the underground sections but you may have to plan for sumps and pumps to drain water away as well. A comprehensive survey of the nature of the water flow around and under the land will be needed to decide on this as it's the last thing you want to get wrong, damp problems in an underground house will be a major headache.

Open Up Difficult Plots of Land

This might sound like a lot of hassle, and a self-build project is likely to be a tough job in any case, but don't be too downhearted. The main point about an underground house, if you are planning one, is that is can allow you to use a plot of land that couldn't be used for a conventional home, so that makes more plots suitable for a self-build. And it won’t stick out like a sore thumb on the landscape either.

Can You Work a 40 Hour Week and Build Your Home?

Ten Ways to Save Money During a Self Build

Ten Things to Ask a Builder Before You Employ Him

Ensuite Bathrooms: Are They Worth It?
Share Your Story, Join the Discussion or Seek Advice..
I hope to be renovating an old cottage in the near future and hope to extend it as an eco house or as amodern type house with modern hi-tech insulation to keep running costs down. One problem I may have is that I may not be allowed to build out past the footprint of the existing building very far and as such I may have to put some rooms underground. Please could you tell me where I can find a list of builders in souther Europe who would have experiance of underground building and insulation against the wamp? Regards, Trevor.
vegetarian - 14-Jun-13 @ 5:41 PM
Title:
(never shown)
Firstname:
(never shown)
Surname:
(never shown)
Email:
(never shown)
Nickname:
(shown)
Comment:
Validate: