Home > Case Studies > How I Shared Costs With a Self Build Partner: Case Study 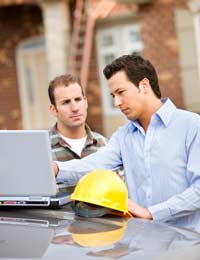 Rob Johnson realised the only way to build his own home would be to share the cost with another person, but where would he find that special someone?

I planned to build my own house on a small plot next to my father’s house. It was originally his garden and had been divided off. Planning permission had been approved for a two bedroom house with an integral garage. As I’d been made redundant and was still job hunting I couldn’t find a finance company to loan me the required amount of money to build the house. I had some savings and my redundancy payment that would cover three quarters of the build. I needed to find some way of financing the rest of the build. My partner Sara was working and we were living on her salary whilst I rolled up my sleeves and got on with building the house.

It was while I was browsing through a magazine for self builders that I spotted an article about a Building Cooperative. The group of twelve couples were building their homes on the large plot, helping each other with the actual build and purchasing the materials in bulk to get a cheaper price. Why couldn’t I do this? Granted there wasn’t room on my plot for another house but if I could find some other builders to join me we could buy in bulk and save money on materials.

I posted a message on a forum for self builders but apart from someone building an extension there were not any more replies. My father suggested putting up postcards in some of the builders’ merchants and it was then that we had some success. The manager of the trade counter at one building supply company told us he often had self builders coming in for materials and he would pass the word around.

Before too long five people had been in touch, all were interested in the idea of bulk buying materials. We met up for a coffee and I outlined my idea of saving money on bricks, timber and other house building materials. Someone mentioned the problem of delivery and storage. After all if we were to purchase bricks they would only be delivered to one site. There would also be the problem of paying the suppliers and keeping track of who owed what money. That was when my father stepped in. Already retired he was relishing the idea of helping me build my house and offered his services as accountant to the group. Ordering materials and dividing the costs between us was easy for him where as the rest of us backed away from the paperwork side of the agreement.

We all lived within ten miles of each other and even though some of us were ready to start building before the others, we all agreed that we could make savings on materials. We started by putting money into a pot so that my father didn’t have to chase us all the time for money. We also agreed to have a fortnightly meeting where we could get together to discuss what materials we needed to order and when. At these meeting our wives and partners met and spent time sharing ideas so they could liaise with ordering fittings for our homes. Rather than have us all trying to collect the materials in our own vehicles we purchased a really cheap pickup truck and used it to move materials to each building plot.

One of the group members had a really large plot. He did intend at a later date to either extend the house or even build a second home so he offered to have the materials delivered there and use the space for storage until we took delivery of what we needed.

It became apparent that there was more we could do to help each other. Whenever spare hands were needed for heavy jobs we helped each other. When a digger was needed to dig footings we hired the company to move from plot to plot so that the self employed driver had continuous work over several days. That was a big saving.

As our homes took shape we found other ways to save money. One of the wives was a dab hand with her sewing machine and made curtains and other soft furnishings. Another partner worked for a kitchen designer who came in and helped design all the kitchens to our own specifications and then we purchased in bulk fitting most of the units ourselves. One self builder had family in the tiling trade whilst another had a brother who was a central heating engineer.

We all benefited from the group build and have become one big extended family. We do talk of buying one very large plot and building again, once we’ve enjoyed the new homes we worked together to create."
Next Page